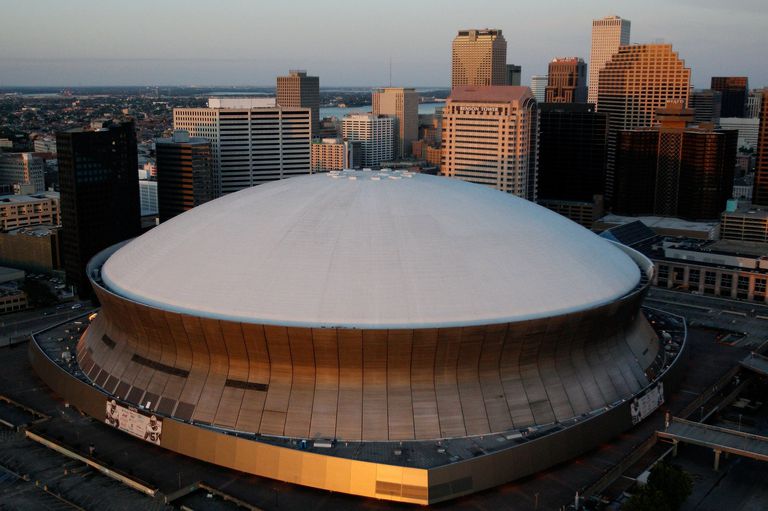 The Mercedes Benz Superdome in New Orleans is world renowned. It’s the largest fixed domed structure in the world and has been the home of the New Orleans Saints and the Sugar Bowl for many years, as well as being a recipient of The NFL’s premier game; The Super Bowl. This incredible structure opened in 1975 and had been known for years as simply “the Louisiana Superdome”. It’s one of America’s highest rated tourist attractions due to its size and location in downtown New Orleans. It also provided shelter for thousands of people in 2005 during and in the aftermath of Hurricane Katrina. It’s currently owned and operated by the state of Louisiana.

The air in this huge arena is conditioned by large fan coil systems located near the top of the dome. Some of these systems feed the public areas of the arena, and those systems are below ground level. Normally, an arena of this size has cascading air delivered through large systems that circulate conditioned air over patrons in the seats and onto the field of play. These large fan-coil rooms have vane-axial fans and large coil banks to deliver the conditioned air. To replace many of these coils, which were installed over 40 years ago, USA Coil & Air worked with one of our best representatives, The Brian Schneider Company, who has represented USA Coil & Air for 4+ decades. There were real problems associated with the original design, and the age was another important factor. Many of these 6-row coils were either plugged or severely laden with dirt and foreign material thereby reducing their efficiency.

These systems had either 4 or 5 large chilled water coil banks and a non-working bypass above the top coil. Bypass is normally used during intermediate load conditions. In other words, a 70-degree non-occupied day is different than a 90-degree occupied day. This bypass had been closed almost since the inception of the opening of this structure, because the mixed air downstream had high humidity problems and; therefore, didn’t function properly. New Orleans has very high humidity. In theory, a bypass should work but not in an area like Louisiana. The operators controlled these systems by reducing air flow and/or reducing water flow or temperature to achieve control at intermediate conditions. It was also known that the systems were marginal for capacity, especially on high humidity and/or occupied days.

Another problem was the water-carryover downstream of the coils before the fans. Sometimes that moisture can reach the fans which were vertically mounted. It was found that the actual face velocity through these coil systems was as high as 650 feet per minute (FPM). Water carryover normally starts at about 550 FPM, especially on very high coil banks. At 650 feet per minute, it caused rain conditions downstream of the coils and caused damage and wear to the inside of these huge built up systems.

Together, Brian Schneider and USA Coil & Air reviewed all the specifics in order to alleviate as many problems as possible with the new coils. We found there was free area where the bypass existed, and we could add an extra chilled water coil to each system. The bypass would not be used. By changing a 4-coil system to 5 coils or a 5-coil system to 6 coils, the extra face area would reduce the overall system face velocity to below 550 FPM and alleviate the water carryover. With that addition, it also allowed us to supply 7-row coils versus 6-row coils and give the systems added capacity at the same water flows.

Why would we do that? The system coils were designed at a much higher air velocity which would equate to a much higher air pressure drop. By reducing the velocity, we were able to add one row which equates to an extra 2 to 3 degrees on the leaving air temperatures. We simply supplied coils that met the original design for maximum air and water side pressure drops.

There are not many manufacturers that have the capability to build these special 7-row coils. It takes a special finned-tube die to create a 7-row design and the engineering capability to utilize all the tubes in a special circuit on the water side and still have the same end connections. Many times, this is a process of selection and reselection multiple times until you have a maximum increase in performance while still meeting the maximum air and water side pressure drop values. We were also able to reduce the fins per inch (FPI) from 12 to 10 fins, which gives the operator a much better chance to clean these coils over their life expectancy.

These coils were originally galvanized steel, and after 40 years, many of the casings were dilapidated. We supplied 12-gauge Type 304 stainless steel casings in lieu of the standard 16-gauge galvanized steel, for 2 very good reasons. The 1st reason was that the total filled coil weights on the bottom coils could be 5 or 6 coils high and weigh a couple tons, and these needed heavier gauges. The 2nd reason was the tremendous amount of condensate produced by the systems. By code, all the systems must have a large percentage of fresh air, which increases the dehumidifying aspect and thereby produces a lot of moisture on the coil frame and casing.  Galvanized steel is a coating that over time wears off and rusts. For this reason, we almost always recommend stainless steel on casings.

The new MB Superdome coils were all installed by Bernhard Mechanical (Metairie, LA) and are working as expected. It was also great working with the Consulting Engineer, Mark Aymond, Associated Design Group (Lafayette, LA). The coil operators have stated they are very happy with the performance; and for the first time in many years, their only complaint… “it might be too cold”.

USA Coil & Air and our quality representatives pride themselves with offering solutions on replacement coil and air handler projects. There is usually an answer that will provide better performance, additional longevity, ease of access, and/or other important aspects for the owner and operator.